Home to the world’s first botanical gardens, a centre of learning as well as destination for devout pilgrims for centuries and a medieval city-state, the art city of Padua is an unmissable stop on your pilgrimage to Italy. Today we share our favourite things to see in Padua:

Despite having been born in Lisbon, Saint Anthony is often referred to as Saint Anthony of Padua, where his burial place is located at the beautiful Basilica named after him.

Also known locally as ‘Il Santo’, the Basilica was built in the 13th century, shortly after Saint Anthony’s death, with different additions and styles added to the Romanesque temple over the centuries.

The Basilica of Saint Anthony is one of the eight international shrines recognised by the Holy See although it is not the city’s cathedral but it is undoubtedly top of the list of things to see in Padua for pilgrims.

Credited with many miracles, Saint Anthony became the patron saint of lost things, and is revered all over the Christian world.

The city’s Cathedral is dedicated to the Assumption of Virgin Mary and has seen many reconstructions since the original shrine was built in the 4th century and destroyed by an earthquake in the 1100s. The current building built in the 16h century dates to the Renaissance era.

Padua’s Prato della Valle is the perfect place to relax and admire the city’s heritage while taking its lively atmosphere. This magnificent piazza has a unique oval shape and is Italy’s largest square. It features a beautiful green island surrounded by a canal and dotted with 78 sculptures of illustrious locals.

An unmissable place and definitely one of the top things to see in Padua. 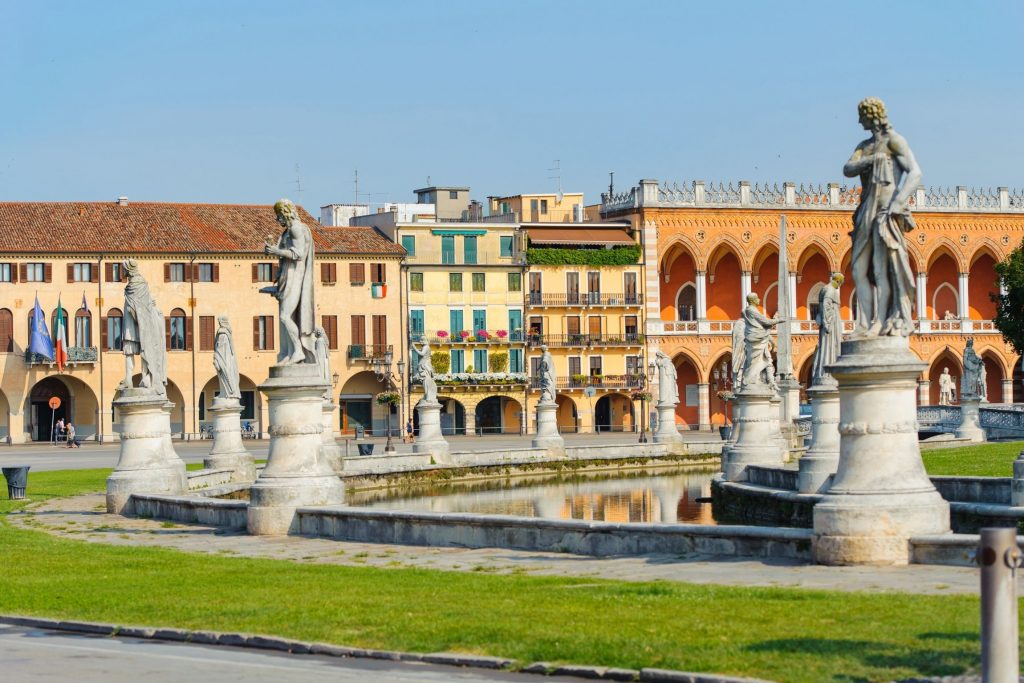 As well as Prato della Valle, there are many other grand piazzas to stroll and admire in Padua including Piazza Duomo home to the Cathedral, Piazza dei Signori with its 14th century clock tower, Piazza delle Erbe and Piazza della Frutta where you will find the Ragione Palace.

The 13th century Ragione Palace was once a town hall, justice palace and food market all in one impressive building.

On the top floor visitors can admire ‘Il Salone’, a vast medieval hall featuring impressive frescoes depicting astrological themes. On the ground floor foodies will be amazed by the array of fruit, vegetables, pasta, cheeses and all sorts of delicacies on display at the Sotto il Salone, a food market with 800 years of history.

Founded in 1222, the University of Padua is Italy’s oldest after Bologna’s and some high profile names have studied and teached here including Galileo Galilei and Nicolaus Copernicus.

Palazzo del Bo is the historical seat of the University and here you will be able to admire the world’s oldest surviving anatomical theatre, dating back to the 16th century.

Gardening and Science meet in harmony at Padua’s Orto Botanico, which is part of the University of Padua and is home to over 7000 plants.

Created in 1545, these are the world’s oldest university botanical gardens, planted in the 16th century to facilitate scientific research so students would analyse plants and their medical properties. That is still the gardens’ main purpose to this day, which is also a UNESCO World Heritage Site.

Another must-visit in Padua is the Cappella degli Scrovegni, which is home to the famous Giotto frescoes, one of Italy’s proto-Renaissance masterpieces.

Giotto di Bondone’s religious frescoes were commissioned in the 14th century by local banker Enrico Scrovegni, to be painted on his private family chapel. They are considered Giotto’s most influential works and they would shape future Renaissance art.

The frescoes feature different episodes of the life of Mary and Jesus and cover all the surface of the chapel, including walls and ceilings. They were ground breaking for their unusual use of perspective and Giotto di Bondone’s naturalist style, painting religious figures with human characteristics and emotions.

We hope you enjoy our top things to see in Padua, one of the fantastic locations on our Pilgrimage to Italy tours.

For details about our pilgrimage tours, contact our travel experts.