Home of Popes and Saints, cradle of Christianity and also of Western civilisation… There are many extraordinary holy sites to visit and things to do on a pilgrimage to Rome, the Eternal City and one of the world’s greatest Catholic destinations: 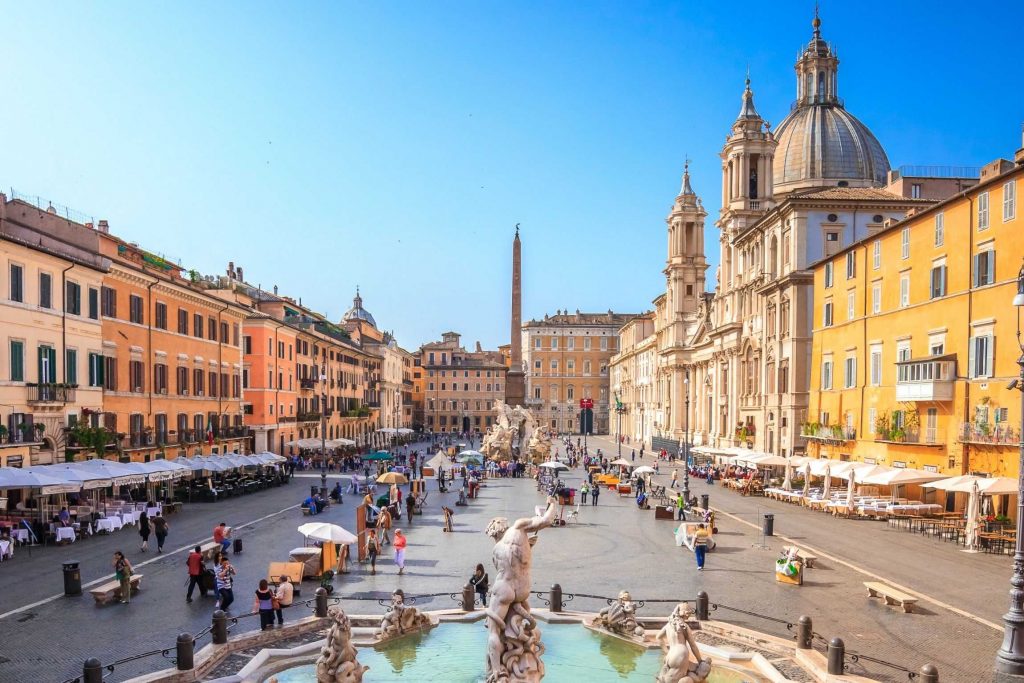 Saint Peter’s Square and its Basilica are unmissable for pilgrims to Rome, as the spiritual centre of Christianity and residence of the Pope.

Pilgrims from all over the world travel to Rome and Saint Peter Square to see the Pope during his Papal audiences and attend liturgical events celebrated by the Pope. Easter and Christmas Papal Masses are particular special dates for pilgrims and the square can host up to 300,000 people.

Built in the 17th century, Saint Peter Square is the heart of the Vatican and a beautiful space of magnificent architecture and art.

The square is flanked by 88 pilasters and 284 columns decorated with 140 statues of saints, as well as a 25-metre high obelisk which was brought all the way from Egypt in 1586 and two beautiful fountains.

Saint Peter’s Basilica is the world’s largest church and a masterpiece of religious architecture. The tomb of Saint Peter is located directly under Michelangelo’s spectacular dome.

The Sistine Chapel or Cappella Sistina is considered Michaelangelo’s masterpiece and one of the artistic treasures you can admire in the Vatican City. It is in this incredible setting that Popes are elected and inaugurated.

The temple was built in the 15th century and it took Michelangelo four years to pain the dome’s breathtaking frescoes. He would then spend another five years to complete the frescoes depicting the Final Judgement, another masterpiece located over the high altar.

A short distance from the Vatican, pilgrims will find Castel Sant’Angelo, built in the year 135 by Emperor Hadrian as a mausoleum for him and his family.

The building was turned into a fortress in the 5th century and has had many uses since including a prison, military barracks and a refuge for the Pope.

A secret 800-metre corridor connects the fortress and the Vatican since the 13th century, for the Pope to be able to escape and seek refuge in case of a siege.

Saint Paul Outside the Walls

Beside Saint Peter’s Basilica, there are other three major basilicas in the city, all of great beauty and interest to those on a pilgrimage to Rome: Saint Paul Outside the Walls, Saint John Lateran and Saint Mary Major.

The Basilica of Saint Paul Outside the Walls was built in the 4th century on the burial place of Saint Paul the Apostle and it is another important religious site for those on a pilgrimage to Rome.

Along the nave of this beautiful basilica, pilgrims can admire mosaics dedicated to all the Popes, from Saint Peter to Pope Francis.

The Basilica of Saint John Lateran is the Cathedral of Rome and considered the oldest church in Europe. It was founded in the 4th century in honour of St John the Baptist and St John the Evangelist, when the Palace of the Laterani family was given to the Bishop of Rome by Constantine I.

It is considered the mother church of the Roman Catholic and it is one of the most beautiful churches in the city with a stunning 13th century cloister and a 18th century facade where the Pope blesses people on Holy Thursday.

Nearby pilgrims will also find the Holy Stairs (Scala Santa), believed to have been stepped on by Jesus Christ during His Passion and moved from Jerusalem to Rome in 326 by Saint Helena.

Another must-visit for pilgrims in Rome is the Basilica di Santa Maria Maggiore, one of the city’s four major basilicas and the largest church dedicated to the Virgin Mary in Rome.

It was built in the 4th century on a former pagan temple dedicated to the goddess Cybele and it is also known as Our Lady of the Snows. According to legend, the Virgin appeared to Pope Liberius and gave him instructions to build the church and its outline was shaped by a miraculous snowfall episode which took place in the middle of a heatwave.

When in Rome… visitors on a pilgrimage to Rome should also take the opportunity to explore the city’s fascinating monuments, archaeological sites and history.

A visit to the imposing Colosseum, a symbol of Rome, is as unmissable as St Peter’s Square.

The Colosseum is the world’s greatest Roman amphitheatre which used to host up to 50,000 spectators and opened to the public in the year 80.

The games and entertainment hosted at the Colosseum to the amusement of Ancient Roman society ranged from gladiator fights to exotic animal exhibitions and even executions. The last games were held at the Colosseum in the 6th century.

Buried and forgotten about for hundreds of years until it was excavated in the 19th and 20th centuries, the Roman Forum gives visitors to Rome an idea of what life was like in Ancient Rome.

The Roman Forum was the beating heart of the city where religious, political and social events took place, with temples, triumphal arches and even the Senate located here.

The Via Sacra, its main avenue, stretched all the way to the Colosseum connecting all the most important sites in the city and was also where ceremonial marches took place.

Completed in 126AD and still standing beautifully intact, the Pantheon is the most exquisite and best preserved building from Ancient Rome. It is a testament to the brilliance of the architects and engineers of that time.

Originally a temple, it was turned into a church in the 7th century.

The Pantheon’s most striking feature is the dome, which features an opening or oculus of 9 metres allowing natural light to come into the temple, illuminating the whole building. Renaissance architect and painter Raphael is buried at the Pantheon, as well as other Italian kings.

Another fascinating site to visit while on pilgrimage to Rome are the Catacombs of Saint Callixtus.

Rome’s catacombs are an extraordinary network of burial tunnels dating as far back as the 1st century and used up until the 5th century. Created due to lack of space in the city , they run for hundreds of kilometres underneath the Rome and they were used as a cemetery by citizens of various religious traditions including pagan, early Christian and Jewish.

There are more than 60 catacombs in Rome but only five can be visited by the public, one of them the Catacombs of San Callisto. These are 20 kilometres long and are the resting place of 16 pontiffs as well as Christian martyrs and early Christians.

We hope you find these travel tips for your pilgrimage to Rome useful. To plan your trip, organise a group or request more information about our upcoming pilgrimages, contact the Joe Walsh Tours Pilgrimages travel team.