The Feast of the Epiphany, 6th January, is the day we commemorate and remember the visit of the Three Wise Men or Three Kings to worship baby Jesus.

The Three Kings had followed a star to Bethlehem that let them know of the birth of a special king, and brought baby Jesus very special gifts. Melchior brought him Gold, Gaspar (or Caspar) brought him Frankincense and Balthazar brought him Myrrh.

These were important and meaningful gifts: precious gold signified the importance of Jesus, frankincense was a sign that Jesus should be worshiped as it was often burned in the temple and myrrh foretold of his suffering, as it was used by the women to anoint Jesus’ body when he died.

There are many interesting traditions associated with the Feast of the Epiphany. 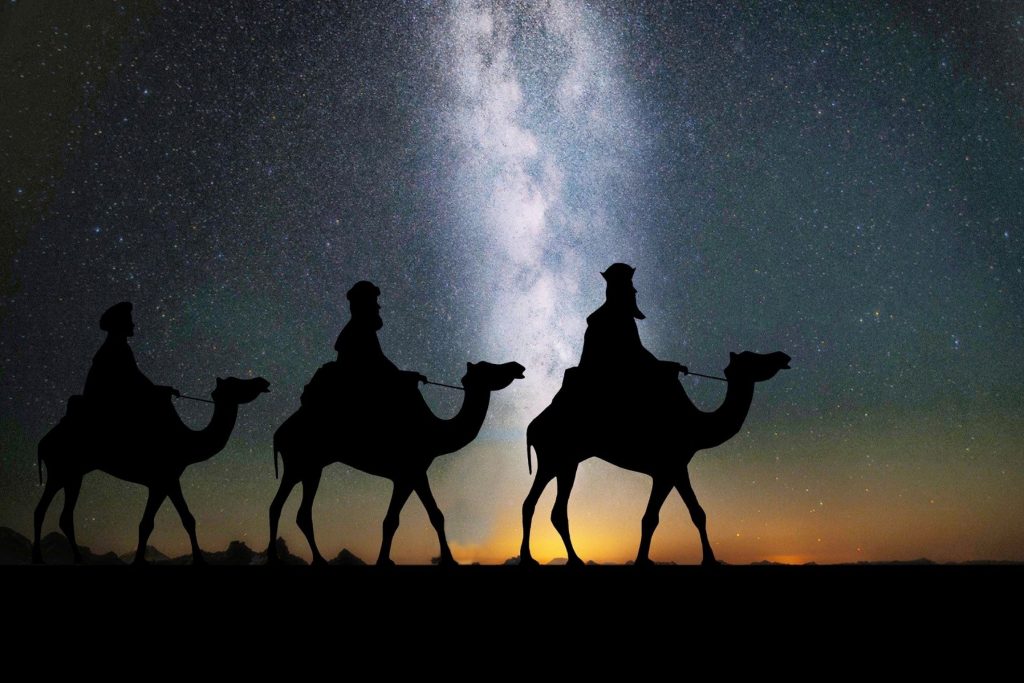 In Spain and Spanish speaking countries, Epiphany or ‘Dia de Reyes’ is the most important day of Christmas for children as the Three Kings bring them gifts all the way from the East. Those who didn’t behave might get coal instead.

A cake called ‘Roscón de Reyes’ is traditionally eaten on this day. It might have a little figure or a coin hidden.

In Italy, children also get presents on the Feast of the Epiphany but they are brought by a kind old witch called Befana who fills their stockings.

According to legend, the Three Wise Men had asked Befana for directions on their way to Bethlehem to see Jesus. They invited her to join them but she refused. Having missed her chance to bring presents to baby Jesus, she now delivers them to other children.

In France and French speaking regions in Europe, an almond tart called ‘Galette des Rois’ is eaten on the Feast of the Epiphany, it has a golden paper crown and a small toy hidden inside. Whoever finds the toy gets to wear the crown and be king or queen for the day.

In Portugal, a cake called Bolo Rei is eaten on Dia dos Reis, Day of the Kings. It is also a custom to go from house to house in small groups to sing ‘Reis’, which are songs about the life of Jesus, and be welcomed by the households with different treats.

In Germany and other central European countries, the Epiphany is a traditional time for house-blessing.

The letters K+M+B and a year are written in chalk on the doorways. These stand for the names of the Three Kings: Caspar (Kasper), Melchior, Balthasar; and also abbreviation of the Latin ‘Christus Mansionem Benedicat’, May Christ bless the house.

In Poland, big parades also welcome the Three Wise Men on the 5th January; and a Three Kings Day cake is eaten on the feast of the Epiphany.

In Ireland, 6th January is the Women’s Little Christmas or Nollaig na mBan, as it is a day when traditionally the women, who managed most of the work during Christmas, would have a rest day.

Happy feast of the Epiphany from the Joe Walsh Tours team.

For details on upcoming pilgrimage tours, contact our travel experts.