Religious architecture, from tiny chapels to magnificent cathedrals, is an integral part of the rich cultural and spiritual heritage of Spain, one of our favourite destinations and land of pilgrimage for many centuries.

To celebrate, we take you on a tour of the most spectacular cathedrals of Spain.

The Cathedral of Saint Mary in Burgos is a masterpiece of Gothic architecture and one of the most magnificent monuments on the Camino de Santiago Camino Frances route.

Work began in the Cathedral in the 13th century and was completed in the 16th century. It is home to magnificent works of art such as paintings and stained windows.

It is also the resting place of El Cid and his wife Doña Jimena. 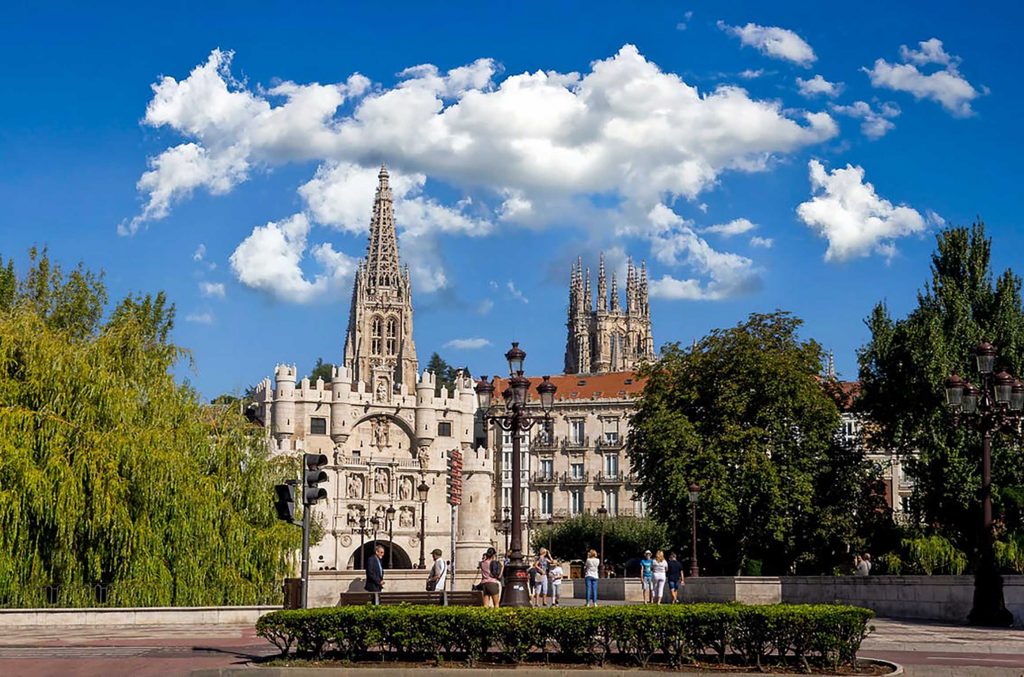 The Cathedral Fortress of Avila was built in the 12th century within the city’s imposing medieval walls. Its apse, ‘cimorro’, is in fact one of the turrets of Avila’s Wall.

The cathedral is dedicated to the Saviour, Catedral del Cristo Salvador, and it is considered one of the first Gothic cathedrals in Spain.

UNESCO World Heritage Avila is known as the ‘city of stones and saints’ as it has the highest number of churches and temples in Spain. It is the homeplace of Santa Teresa de Jesus and pilgrims can visit the house where she was born and the museum.

Born in Avila in 1515, Saint Teresa is one of the founders of the Discalced Carmelites along with Saint John of the Cross.

Avila is one of the stops in our Shrines of Europe tour.

The cathedral has a number of unusual carvings, including an astronaut and a gargoyle having an ice cream. How can this be possible? Could 17th century stonemasons see the future?

These carvings were in fact added in the 1990s by stonemasons working on the restoration of the Cathedral, keeping in with the stonemason tradition of adding hidden messages or figures in their work.

A stunning UNESCO World Heritage Site of extraordinary architecture, Salamanca is one of the cities on the Via de la Plata Camino de Santiago route and our Shrines of Europe tour.

Destination for pilgrims since the Middle Ages, Santiago de Compostela Cathedral is the resting place of St James the Apostle and was once the highest building in Europe.

The original building was a Romanesque chapel to host the many pilgrims travelling to the city to visit the remains of St James the Apostle, which were found in a field nearby in the 9th century.

Over time, as the pilgrimage tradition to Santiago grew, so did the shrine. Different additions and styles have given Santiago Cathedral the unique character and iconic facade we admire today.

The Cordoba Cathedral Mosque is possibly one of the Spanish shrines with the most interesting but also controversial history in Spain.

It was originally built as a Mosque in the 8th century when Cordoba was an important centre of culture in the Islamic world and one of its largest mosques. It was built over the San Vicente Church which had been erected in the 6th century by the Visigoths.

The Mosque was converted into a Cathedral in the 13th century during the Reconquest and dedicated to the Assumption of Mary.

Along with the Alhambra palace in Granada, the Mosque Cathedral of Cordoba is one of the country’s finest examples of Moorish architecture. It was once the most important mosque in the Islamic world after Mecca.

Catedral Primada de Toledo or Catedral de Santa Maria was built in the 13th century over a Visigoth temple dating back from the 6th century.

Toledo Cathedral has a great number of paintings, sculptures and stunning medieval stained glass windows, such as those depicting saints and apostles on the east side.

The one known as ‘Transparente’, transparent, is the masterpiece of the sculptor Narciso Tomé, completed in 1732. It is conceived as an altarpiece and represents different passages of the Bible which are illuminated by the skylights of the apse.

Pilgrims on the Camino de Santiago encounter wonderful shrines and chapels all along the trails to Santiago de Compostela. Leon, on the Camino Frances, is home to one of the most beautiful cathedrals in Spain and the Camino trails.

It is a stunning example of French Gothic architecture with pure ascending lines and exquisite stained glass windows dating as far back as the 13th century. Nearly 1800 square meters of stained glass let streams of beautiful light into the temple, giving the building its nickname ‘House of Light’.

The Last Judgment portico over the cathedral’s main entrance is a truly magnificent sculpture.

Some of these beautiful cathedrals and destinations are part of these upcoming tours:

We hope you enjoyed this journey to some of the most spectacular cathedrals of Spain.  You can check on our website regularly for new tours.

For more information about our upcoming shrines tours or to organise a private group, contact our travel team.